My WhatsApp status, “Better to be feared than be loved” landed me into a whole of debates. Well, a lot of people disagreed with it, but today morning, a friend of mine, fortunately, agreed with it. 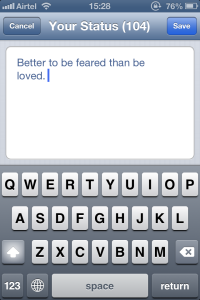 She said that she agreed with the statement, currently, but then she asked me a question, an excellent question indeed: “I mean, as it is you’re against building a world around fear of God, how would this be much different?” Well, frankly, I’d never seen it that way. I just put up the status giving in to the circumstance and submitting to the voice yelling in my head like a rat in a hot cage! I didn’t really think this would get much attention. Anyway, she went on to say, “What is really the point of fear? I mean, my belief is that fear should be eliminated. There are seven negative emotions which play havoc with the positive ones, and fear is one of them”.

I really hate it when I lose the grasp on my concepts, my ideas. I really don’t like to be contradicted. So I was reeled into this world of “fear”, involuntarily, the fear of being proved wrong. I put my phone aside, pushed myself back on my plush chair, the conditioned air soothing my senses, slowly and deftly, and I listened to one of my favorite songs, “The Phantom of the Opera”.

In Gaston Leroux’s magnificent novel Le Fantôme de l’Opéra, various emotions are brought out in a scintillating manner. Erik – the Phantom, loves Christine. All folk fear the Phantom. Christine sees him as an angle and admires his prowess. Raoul is jealous of Christine’s affiliation with the Angel. The Phantom faces a tragic death. He understands Christine’s love and sends her back to her lover. Now, what is the Phantom here? Is he good or is he bad? Does he have positive emotions or negative emotions or both?

Well, I’ll revert back to this shortly. 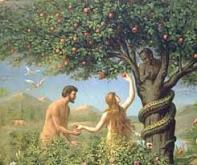 o the Eden and invade Adam and Eve’s privacy, just for a bit. Some say that God created human beings to live in a “Paradise” on Earth, until that wretched and lustful woman, Eve, committed the Original Sin and brought death into the world. Just keep this trivia in mind, I’ll get back to this shortly.

There is happiness only because of the undeniable existence of a system called “unhappiness”.

There is hope only because there is despair.

There is richness only because there is poverty.

There is love only because there is hatred.

There is “me” only because there is…“not me”.

I’ll admit the last one was, on the face of it, witless. But, if you happen to dig deeper into philosophy and neurology, you might be able to appreciate my dialogue. (Check this video out, you might find it interesting and it might reinforce my point. It’s a Ted talk by acclaimed Neuroanatomist, Dr. Jill Bolte Taylor,www.youtube.com/watch?v=UyyjU8fzEYU ). Your frontal lobe gives you your “identity”… “Your” identity. Now, the moment we are attributed, chained, glued or attached to something personal, something of our own, we start to succumb to emotions, involuntary.

“I” drives the desire and from that possessive nature spurts all emotions.

Based on a philosophy of subjective idealism, metaphysical solipsists maintain that the self is the only existing reality and that all other reality, including the external world and other persons, are representations of that self, and have no independent existence.

So, the moment we get seduced by the forbidden fruit called “Self”, we involuntarily commit the “Original Sin”. We become the carriers of Eve’s sin and we all fall into this “Anti-paradise” world.

Now, it can very well be deduced that emotions are born with us and it cannot be thought of as a separate entity because we aren’t separate from our identities and we never will be, quite frankly. We do things that benefit us and that alone is the tool that rules the world.

Disclaimer: Nihilists, please don’t feel welcome to comment here. This is not your place.

So, having asserted that the status of “emotionally inert” is impossible, I would now like to move deeper. Our surroundings are exactly how we designed it. It resonates with our minds and it gives us an outlook of our creative genies. That’s right, Genies. We all have these Genies inside us dictating boundaries and conditions and rules and norms. When something happens, we react to it and this reaction is based on what we have “learnt” since our childhood and how we have trained our mind to perceive the chain of events.

Why do we feel sad when we don’t get to eat an ice cream, but our brother/sister does?

Why do we feel jealous when the person we like gets closer to another person?

Why do we feel pain when we are deprived of opportunity?

None of these cause us physical harm to provoke a response to stimuli; these are mere happening in the world we perceive. We have, throughout our journey of this convoluted cerebral development, assigned some attributes to all of these occurrences and we pass it on to the next of kin, most dutifully. I presume I needn’t go into the details of how children are yelled at and introduced to the concepts of fear, corruption, grief, anger, happiness, enjoyment, hope and such. So, as long as we perceive the world, we will have to deal with a cocktail of emotions constituted both the so-called “positive” and “negative” emotions.

Nothing can be created, nothing can be destroyed, only, it can be converted from one form to another. So, if our quest is to “eliminate” fear, then my dear friend, it is quite impossible. Now, converting the fear into…well, making it drive us towards “something positive”, like, my fear of being wrong made me write this, which is “good”, i.e., the opposite of “bad”, is quite real. But, trying to eliminate any emotion is impossible.

I mean, you cannot be happy if you don’t know what sadness is. You cannot be brave if you haven’t experienced fear. You cannot have hope if you are unaware of despair.

Emotions are like a house of cards, pull just one card at the bottom and the whole structure crumbles. Humans have this unique existence only because of this cluster of emotions and I’m afraid, we are cursed (or blessed) to live with it, just like the Phantom.

I know this article isn’t complete. So, guys feel free to comment and help me get my thoughts straight.